Places in the Bible

This week, we will take a trip to some place a little different. Solomon's Porch. It is not a city, town or village. Not a province, state or territory. This was a part of a building in Jerusalem. That building being Solomon's Temple. 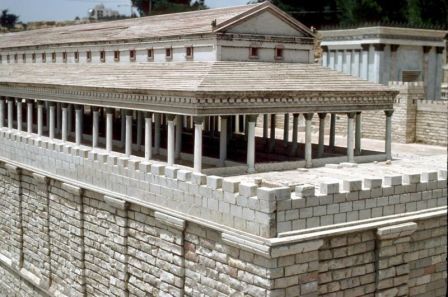 Also known as Solomon's Portico, or Solomon's Colonnade, was built on the eastern side of the Temple's outer court in Jerusalem. In Hebrew, it is called Ulam, meaning a porch or hall. Thayer's Greek Lexicon gives it this explaination, “a covered colonnade where people can stand or walk protected from the weather and the heat of the sun”.

1 Chronicles 28:11-12 tells of how King David had given his son, Solomon, the plans for the temple, incuding the plans for the porch, which was to be built on the eastern side of the temple. 1 Kings 6:2-3 explains the measurements of the temple and of the porch. Twenty cubits (30 feet or 9.144 metres) in length, and 10 cubits (15 feet or 4.572 metres) in depth. When the Bible gives details such as measurements it is usually something important to God. God gave measurements to Noah to build the ark. He also gave measurements to Moses to build the Tabernacle and everything inside. Measurement details usually signify importance. And this porch was no different. 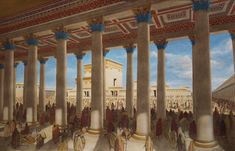 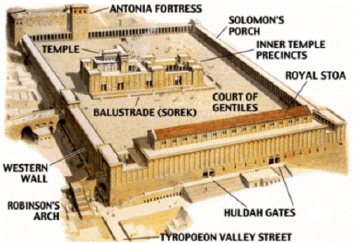 The importance was mentioned in 1 Chronicles 28:9-10, where King David was telling his son to always seek God, and to always serve God "with a whole heart, and with a willing mind." For it was immediately following this advice that David had given Solomon the plans for the temple and porch. David told his son that God wanted Solomon, not David, to be the one to build the temple and porch. It was God who had chosen the design and the exact measurements.

This temple and porch had been built well, for it had lasted many years. According to ancient Jewish historian Josephus, who was there at the time of its destruction, it lasted from the time Solomon had built it until 70 AD when the Romans had destroyed it along with the rest of the temple in Jerusalem. It is strongly believed that, after the destruction of the temple by the Babylonians in 586 BC, the porch was still intact and unharmed.

The temple was later reconstructed by King Herod. It is believed Herod had extended the size by triple the previous measurements. Herod had also added an additional area which many had referred to as a porch, poritco or colonnade, on the south wall. This area was known as Herod's Royal Stoa. However, this was not to be confused with the original part known as Solomon's Porch.

Solomon's Porch had been a popular place for many throughout the Bible, in both the Old and New Testaments. Jesus had "walked and taught" on this particular porch duing the Feast of Dedication as it is mentioned in John 10:23. And one day, as we are told in Acts 3:11, Peter and John were going up to the temple at the designated hour of prayer, when they had encountered a lame man asking for alms. Although Peter and John had no silver and gold, they did not want to leave the man without granting him something to help. So, Peter told the man to stand and walk. The man did. In fact, he began "walking and leaping and praising God" because of this miracle that had taken place on the famous porch.

We are told, in Acts 5:12, that "many signs and wonders were regularly done among the people by the hands of the apostles. And they were all together in Solomon's Porch."

While there has never been found any actual proof of this porch being destroyed, it is believed to not have survived the destruction by the Romans in 70 AD, as mentioned earlier. However, researchers and archaeologists, along with other experts are still, to this very day, searching for this longlasting, well-built, important historical structure.

Until next time, keep reading God's word, and enjoy the journey to the many Places in the Bible.