The great destruction of Jerusalem and its beautiful temple is a significant part of history and some ancient writers mention some of the strange events witnessed. Some events were also witnessed a few years before in about 66 AD.  Josephus, in his Jewish Wars, (wrote about 75 AD.)---

"Besides these [signs], a few days after that feast, on the one- and-twentieth day of the month Artemisius, [Jyar,] a certain prodigious and incredible phenomenon appeared; I suppose the account of it would seem to be a fable, were it not related by those that saw it, and were not the events that followed it of so considerable a nature as to deserve such signals; for, before sun-setting, chariots and troops of soldiers in their armour were seen running about among the clouds, and surrounding of cities. Moreover, at that feast which we call Pentecost, as the priests were going by night into the inner [court of the] temple, as their custom was, to perform their sacred ministrations, they said that, in the first place, they felt a quaking, and heard a great noise, and after that they heard a sound as of a great multitude, saying, "Let us remove hence" (Jewish Wars,VI-V-3).

Going back to the Gospels and Matthew 24 we see what is called the Olivet Discourse.  Yeshua is with some of his disciples on the Mount of Olives and as they overlook Jerusalem and the temple, he is giving some answers to a few questions asked.  Yeshua is speaking like the prophets of old and is using judgment metaphors and language like what is found in Isaiah13 and other parts of scriptures.  He tells the disciples that their very generation will see these things (prior to verse 34) happen.  In Matthew24:34 the word "genea" is found in the text and it means "generation".  It does not mean "race" (genos). Herein lies a problem.  Some read the verses prior to Matthew 24:34 and see this as clearly speaking of the very end of the world and the second coming, but these did not happen within the lifetimes of the disciples.  Some have even said this proves the Gospels are false! Most Christians are not aware of this problem.  When readingMatthew 24 they see the face of Hal lindsey and Tim Lahaye, when they should be seeing the face of Yeshua and Isaiah.  Christians have been taught the wrong things so long that when the truth is presented they automatically reject it and hold to the popular 'last days" and "rapture" ideas promoted by futurists and dispensationalism.

In Isaiah 13:9-10 we see a judgment predicted for Babylon by the prophet Isaiah. The text says,

"See, the day of the Lord is coming
—a cruel day, with wrath and fierce anger—
to make the land desolate
and destroy the sinners within it.
10 The stars of heaven and their constellations
will not show their light.
The rising sun will be darkened
and the moon will not give its light."

Please note that no literal stars fell or grew dim, nor did the sun darkened..  These words and phrases are not literal but are metaphors and apocalyptic speech telling of the fall of peoples and nations. All the great commentaries will agree.  Now note how Yeshua said very much the same thing in Matthew 24:29,

"Immediately after the distress of those days "'the sun will be darkened, and the moon will not give its light; the stars will fall from the sky, and the heavenly bodies will be shaken."

Isaiah was speaking about what would happen to Babylon..and it was eventually sacked by the Medes and Persians.. Likewise,Yeshua was speaking of what was coming soon to Jerusalem and it did experience a great destruction in 70 AD. We must interpret scriptures with scriptures.  We also see language of a similar type in Isaiah 34:4, which is about the destruction of Edom, and not the end of the world.  Furthermore, Ezekiel 32:7 is about judgments coming upon Egypt.  It is not speaking about the end of our planet.

“Then will appear the sign of the Son of Man in heaven. And then all the peoples of the earth will mourn when they see the Son of Man coming on theclouds of heaven, with power and great glory. 31 And he will send his angels with a loud trumpet call, and they will gather his elect from the four winds, from one end of the heavens to the other."

At first blush this would seem true but Yeshua said in verse 34, that all would take place within the time of the generation of the disciples, and we know the second advent of Yeshua did not happen then.  We are still waiting.  Can we somehow read these with a different outlook too? Yes we can! Look at Isaiah 19:1--

"A prophecy against Egypt: See, the LORD rides on a swift cloud and is coming to Egypt. The idols of Egypt tremble before him, and the hearts of the Egyptians melt with fear."

Did the Lord actually ride on literal clouds to ancient Egypt? Of course not.  This is once again apocalyptic and symbolic language (and metaphors) speaking of judgment and punishment coming to an ancient land.  Clouds are also used as metaphors. They also illustrate the Lords power. Note Psalm 18:9. The same can be said for Matthew 24:31. The average christian would say that fluffy winged angels are going forth to carry peoples to heaven in glowing chariots but this is not so.  It is more likely speaking of Christian evangelists or messengers (angels) going out and converting people all over and bringing them into the true church!!! In ancient times trumpets would be sounded to gather folks into various meeting places.  The Great Commission has not been completed yet around the globe but by 70 AD the gospel was spread thoughout the whole Roman World or economy and somewhat beyond.

We can readily see that the words of Yeshua came true, but one has to understand what he is saying.  Another illustration is a dream of Joseph in Genesis 37:9 where his father, mother, and brothers are represented as a sun, moon, and stars bowing to him.  Note how the book of Revelationmakes use of similar imagery in chapter 12, where we see a women clothed with the sun, moon beneath her feet, and she is wearing twelve stars.  It is not literal. 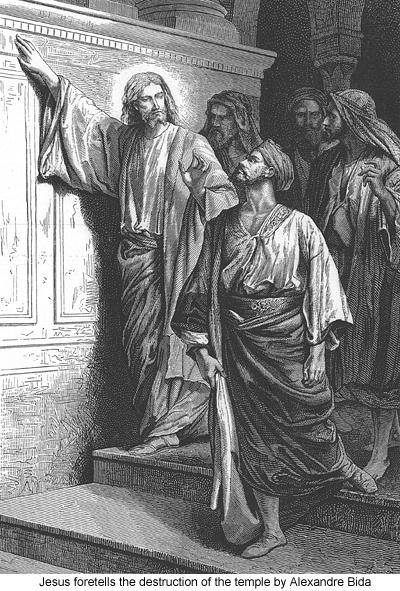