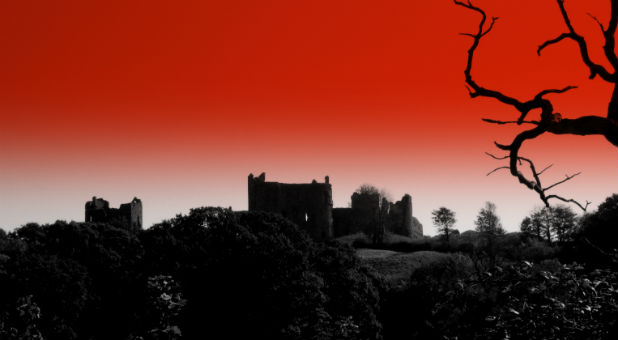 All Hallows' Eve, or Halloween, originated in the 7th century AD. (Athena's Pix/Flickr/CC)

On October 31, spooky beings and superheroes, cartoon characters and rubberized celebrities will line the streets and mall hallways of America, anticipating sugary rewards. Compelled by shouts of "trick or treat," children of all ages will tote receptacles of various size and weight harboring the result of the night's hunt. It's called Halloween, and while for most it is a harmless annual activity, its roots run deep in ancient paganism.

All Hallows' Eve, or Halloween, originated in the 7th century AD. It was celebrated on May 13 and was a night for remembering deceased saints and martyrs. The date was later changed to November 1 in order to Christianize the pagan holidays Beltane and Samhain—festivals of summer, winter and fire.

James Frazer, in The Golden Bough, said, "throughout Europe, Hallowe'en, the night which marks the transition from autumn to winter, seems to have been of old the time of year when the souls of the departed revisited their homes in order to warm themselves by the fire." Such ghosts walked the countryside retrieving offerings of food and drink (the treat) supplied by living family members. Darker forces roamed the night as well. Demons, hobgoblins, witches on broomstick—all haunting the night with acts of mischief (the trick).

Real witches were also known to revel on Halloween night. According to Man, Myth & Magic, the witches of Aberdeen danced "round an old grey stone at the foot of the hill at Craigleuch, the Devil himself playing music before them." Modern witches and Wiccans practice similar skyclad (nude) Halloween traditions, calling on Earth spirits and goddesses to visit their knife drawn circles of power.

In the upcoming book by me and Josh Peck Abaddon Ascending: The Ancient Conspiracy at the Center of CERN's Most Secretive Mission, we consider, among other topics, the goddess Hecate, the Titan Earth mother of the wizards and witches, who illustrates perhaps better than any other ancient goddess the connection between Wicca, the Celtic Halloween traditions and the realm of evil supernaturalism.

As the dark goddess of witchcraft, Hecate, like Isis, was worshiped with impure rites and magical incantations. Her name was probably derived from the ancient Egyptian word Heka, meaning "sorcery" or "magical," which may explain her association with the Egyptian frog goddess of the same name. This may also explain the affiliation of frogs with witchcraft, and the various potions of frog-wart and "hecateis," Hecate's hallucinogenic plant, also called Aconite, which supposedly sprouted from the spittle of Cerberus (Hade's three-headed guard dog) that fell to the ground when Hercules forced him to the surface of the Earth.

Because her devotees practiced such magic wherever three paths joined, Hecate was known by the Romans as Trivia ("tri"-three; and "via"-roads). Later, when the Latin church fathers compared the magic of the goddess Trivia with the power of the Gospel, they found it to be inferior, and thus the pursuit of Hecate's knowledge became known as "Trivial Pursuit," or inconsequential. But the fact that Hecate's followers sincerely believed in and feared her magic and presence was legendary. This was primarily due to her role as the sorceress of the afterlife, but true believers also feared Hecate's ability to afflict the mind with madness, as well as her influence over night creatures. She was thought to govern haunted places where evil or murderous activity had occurred. Such areas where violence or lechery had a history were believed to be magnets of malevolent spirits, something like "haunted houses," and if one wanted to get along with the resident apparitions they needed to make oblations to the ruler of the darkness—Hecate.

Hecate's familiar, the night owl, announced the acceptance of the oblations, and those who gathered on the eve of the full moon perceived the spooky sound of the creature as a good omen. Statues of the goddess bearing the triple-face of a dog, a snake, and a horse overshadowed the dark rituals when they were performed at the crossing of three roads. At midnight, Hecate's devotees left food offerings at the intersection for the goddess ("Hecate's Supper"), and, once deposited, quickly exited without turning around or looking back. Sometimes the offerings consisted of honey cakes and chicken hearts. At other time's puppies, honey and female black lambs were slaughtered for the goddess and her strigae.

The strigae were deformed and vicious owl-like affiliates of Hecate who flew through the night feeding on bodies of unattended babies. During the day the strigae appeared as simple old women, and such may account for the history of Halloween's flying witches. The same strigae hid amidst the leaves of the trees during the annual festival of Hecate, held on August 13, when Hecate's followers offered up the highest praise of the goddess. Hecate's devotees celebrated such festivals near Lake Averna in Campania where the sacred willow groves of the goddess stood, and they communed with the tree spirits—Earth spirits, including Hecate, were thought to inhabit trees—and summoned the souls of the dead from the mouths of nearby caves. It was here that Hecate was known as Hecate-Chthonia ("Hecate of the Earth"), a depiction in which she most clearly embodied the popular Earth-mother-spirit that conversed through the cave-stones and sacred willow trees.

Hecate was elsewhere known as Hecate-Propylaia, "the one before the gate," a role in which she guarded the entrances of homes and temples from nefarious outside evils (talk about Satan casting out Satan!). She was also known as Hecate-Propolos, "the one who leads," as in the underworld guide of Persephone and of those who inhabit graveyards. Finally, she was known as Hecate-Phosphoros, "the light bearer," her most sacred title and one that recalls another powerful underworld spirit, Satan, whose original name was Lucifer ("the light bearer"). It was nevertheless her role as the feminist Earth-goddess-spirit Hecate-Chthonia that popularized her divinity and commanded reverence from among the common people.

The connection between ancient paganism and the modern customs and costumes of Halloween is easy to trace. The Hecatian myths adopted by Celtic occultists continue in pop culture, symbolism and tradition in the following ways:

Harmless Fun or Doorway to the Occult?

Not long ago some 300 exorcists flocked to Poland for a week-long congress to examine the current fashion for Halloween-themed monsters like werewolves and vampires the world-over, and the apparent connection between this fascination and a surge in demonic possession.

According to the Christian scholars I worked with when writing the book God's Ghostbusters (FREE WITH ANY DONATION IN OCTOBER), this reflected how the world is experiencing an explosion of ancient occultism combined with wicked fascination for ghosts and all things paranormal. In the United States alone, there are as many as 8 million practitioners of witchcraft. On college and high school campuses, vampires, werewolves, and other "creatures of the night" are esteemed as objects of desire and idolized by young men and women who view them as cult icons of envious mystical power. Almost daily we read how Satanism is spreading to public schoolyards and elementary after school clubs, [i] city council meetings are being opened with invocations to Satan, and even church goers are being enchanted by the darkness. An article by Russ Jones for OneNewsNow.com discusses "Mysticism Infecting Nazarene Beliefs" and another by the Telegraph describes how a "surge in Satanism" inside the church has sparked a "rise in demand for exorcists" within traditional religious settings.

And then there is the recent spate of killings and Zombie-like attacks on people and animals as well as by individuals claiming to be vampires and werewolves. The arrest of a Texas man who broke into a woman's house, threw her against a wall and tried to suck her blood is one example. Another case involved a Florida teenager who was later charged together with four other people of beating a 16-year-old boy to death. The teenage girl claims to be a vampire/werewolf hybrid and investigators acknowledge that she and the other suspects appear to be part of a vampire cult.

Rise in this activity is documented in the book God's Ghostbusters (Defender Publishing) which boasts a "who's who" of conservative scholars—including best-selling authors and Christian leaders like Chuck Missler, Gary Stearman, Noah Hutchings, Gary Bates, and John McTernan—who emphasize the need for Christian leaders to take a stand and to speak out on this issue, perhaps even using the month of October and the season of Halloween as opportunity to address congregations on the dangers of occult activity.

A new program joining the web-exclusive daily broadcasts at SkyWatchTV.com is called Teens Rock and will be hosted by the company's COO, Joe Ardis. Commenting on the occult dangers to youth in modern culture, he notes: "Psychologists have long understood how women in general desire strength in men, but few could have imagined how this natural and overriding need by young ladies would be used in modern times to seduce them of their innocence using mysteriously strong yet everlastingly damned creatures depicted in popular books and films like Twilight, New Moon, and Eclipse. Listing all of the related fan sites, music videos, magazines, television shows and movies currently dedicated to erotic obsession with alluring demons-in-flesh would be daunting. But these would have to include television shows like Being Human, The Gates, Underworld, The Vampire Diaries, and True Blood, not to mention the hedonistic gay-themed program The Lair, a series that plays nationwide on all major cable systems based on a vampire-run sex club."

Ardis further admonishes that, "If parents, pastors and youth pastors haven't been paying attention, they need to spend a little time looking into what their children are mentally and spiritually feeding on, because we are losing a generation to darkness. Consider as an example popular youth-oriented magazines like Rolling Stone and their article "The Joy of Vampire Sex." Look at the ménage à trois on the magazine's cover of three nudes bathed in blood with the promise to readers that vampires are 'Hot. They're Sexy. They're Undead.'"

Obviously for people like Ardis, this is a serious issue, but he acknowledges some will disagree and say that focusing on pop-culture memes as a sign of deeper, culturally relevant consequences is an over-assessment of the danger. The present captivation with dark supernaturalism by this generation will eventually fade, some might argue, so we should not worry, as the long-term effects of Harry Potter's witchcraft and Twilight's vampirism will be of no more significance in the years ahead than was the Cowboy and Indian games played by our grandparents.

But as a doctor of theology with a past in exorcism, I personally couldn't disagree more. Mass media, including the Internet, television, film, radio, and other communications systems, have traded Bela-Lugosi-like vampires of former years and silly Abbott and Costello's Frankensteins and Mummies, which could be vanquished with Christian symbols, for monsters of profound demonic character depicted as impervious to Christ's power. As a result, today's youth have exchanged yesterday's pigtails and pop-guns for pentagrams and blood covenants aligned with forces far stronger than former generations could have imagined.

It is no stretch to suggest this is one of the signs that this age is under demonic influence. If we could see through the veil into the supernatural realm, we would find a world alive with good against evil, a place where the ultimate prize is the soul of this generation and where legions war for control of its cities and people.

Whether the reader agrees completely with my assertion, with everything that is happening in culture today, Christian leaders should use the month of October and the season of Halloween to address these issues.

This article originally appeared on SkyWatch.