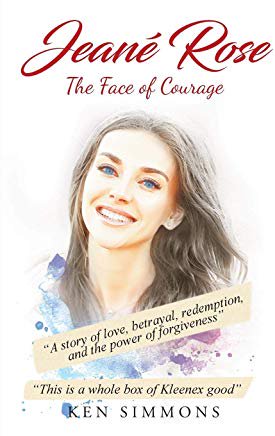 THE TRUE EVENTS that inspired this story are set in the Tampa Bay area in the 1970’s:

There were television news reports of a woman who was abducted during a home invasion, kidnapped, beaten and sexually assaulted. She was then bound and thrown off of the Howard Franklin Bridge in Tampa Bay miles from any shore, where for the entire night and throughout the following day she had to tread water clinging only to barnacle and mussel encrusted pilings of the bridge. Frequently during her time in the water she had to fight off sharks in order to survive before finally being rescued by a fishing boat. The news report indicated her husband was suspected of instigating the attack.

THE FICTIONAL ACCOUNT, inspired by those true events, is set in contemporary times:The heroine in this story is a world famous fashion model Jeané Rose, often called the most beautiful woman in the world. This kindhearted woman, who was never enamored with her own fame or celebrity, was loved by all, appeared with Jimmy Fallon on the Tonight Show, was interviewed by Oprah Winfrey, and married a paparazzi photo journalist who thought the world was his oyster having married a rich model. They had a whirlwind honeymoon, traveled the world, and were granted an audience with Queen Elizabeth II, and the Duke and Duchess of Cambridge, otherwise known as Prince William and Kate Middleton.

Shortly after she surrendered her life to Jesus Christ she was attacked in such a manner and the world was in shock. Their beloved Jeané had been violated. Her newfound faith was what sustained her through this horrific ordeal. The trials of her attacker, as well as that of her husband who had paid to have his wife killed, were dubbed by the press as “The Twin Trials of the Century.” The following courtroom drama is as gripping as any found on the big screen. Having gone through what was an unimaginable ordeal, this becomes a story of faith, redemption, and the amazing power of forgiveness. Her confrontation with her attacker on death row at Raiford State Prison in Florida is an epic and stunning conclusion to this dramatic story. It’s “a whole box of Kleenex good” said a woman reader.