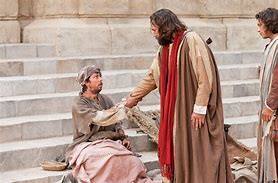 “In the name of Jesus Christ of Nazareth, rise up and walk.”

What Does "IN JESUS' NAME" Really Mean?
by Ken Simmons

That passage in the Bible is one of the most misused and misunderstood of all the scriptures.  The above quote is what Jesus told His disciples shortly before His crucifixion (see John 14:14).

In the picture above Peter said to the lame beggar “I have no silver or gold to give you, but what I do have I give you, in the name of Jesus RISE UP and WALK.”  The man was then seen walking, and leaping, and praising God” (Acts 3:6-8).

The question we need to ask ourselves is: What does it mean to "ask anything in His name?"  Unfortunately it has become a phrase that we tack on casually to the end of just about any prayer, and in doing so it loses all its power and authority.

We have come to believe that if we finish up a prayer (usually a prayer asking God for something), if we simply say “In Jesus’ name” at the end of that prayer then we’ll receive what we asked for.  It's unfortunate that many seem to use it as if they're pulling the handle on a slot machine and saying, “In Jesus’ name” and they’ll hit the jackpot.  Yet others act as though they're waving a magic wand and saying "Abracadabra," and poof, the answer magically appears in a puff of smoke.

The problem is that very few understand the concept of “in Jesus’ name.”  This is not something we should ever say casually or take lightly.  To misuse this powerful statement that Jesus gave us strips it of the power and authority that is behind it and waters it down so much that we might as well say "Abracadabra."

In Jewish tradition the patriarch of a family typically had earned a considerable amount of respect in his sphere of influence.  If he was a person of wealth, or held a position of authority in his community, his word carried a great deal of weight.  Often he could conclude a transaction based on his standing and nothing else, i.e., his word was his bond.  It is somewhat similar to having one's Power of Attorney today, although even one’s Power of Attorney today still falls short of its historical meaning.

Therefore, in Jewish tradition the son who bore the name of such a father could carry on business in the name of his father, or in his father’s place, with great authority.  These were “patronymic” titles that usually began with ben -, or bar –, followed by the father’s name.  The first example that comes to mind is the name David Ben-Gurion, often called the founder of the nation of Israel and its first Prime Minister in 1948.  Another good example is one that we’re likely most familiar with and that is Ben-Hur, which we remember by the 11-time Oscar- winning motion picture “Ben-Hur” starring Charlton Heston.  The main character was the son of Hur and he carried on business and social affairs with the full authority of his father even long after his father’s death.

Let’s put that into a modern context.  The Secretary of State in America is one who is appointed by the president, and he or she conducts affairs and makes decisions as the voice, or representative, of the President of the United States.  That person speaks for the president, as though he or she were the president.

That brings up an example of when “in his name” was less than effective.  Former Secretary of State Rex Tillerson had frequent disagreements with President Donald Trump, meaning that when he spoke it didn’t necessarily represent the thoughts and intents of the president, and he was eventually dismissed and another man was chosen to take his place.  The president felt that Mike Pompeo was more in tune with his policies and intentions so he took Tillerson’s place.  When Secretary Pompeo speaks the president is confident he is speaking for and on behalf of the president.

If we, as believers, conclude our prayers with “in Jesus’ name” we must be in agreement with Jesus in every way, having surrendered our will to His completely and without reservation.  We must be one with the Holy Spirit to the extent that we are confidently serving Him and there is nothing in our character now that reflects poorly on Him.  Instead, our life is a reflection of Him that brings glory to Jesus and to the Father.

When we say “in Jesus’ name” we are doing so in faith, nothing wavering. We are not hindered by unbelief, but we are exercising the kind of faith that is “the substance of things hoped for and the evidence of things not seen.” (Hebrews 11:1).

If our prayers and our actions meet these criteria – walking in absolute unity with Christ, and unencumbered with doubt, then we will be able to say “In Jesus’ name” and it will carry with it His full authority and we will see the expected results of exercising that authority.

Jesus told His followers: "Truly, truly I say to you, He that believes on Me, the works that I do shall he do also; and greater works than these shall he do because I go unto the Father" (John 14:12).  When that happens we have opened wide the doors for the anointing of the Holy Spirit to endow us with the power (dunamis) and authority (exousia) to do the works that He did.  (NOTE:  Our word dynamite originated from the Greek word dunamis.)

One of the most powerful promises of Jesus was when He said, “For when two or three are gathered together in my name, there am I in the midst of them” (Matthew 18:20).  It is in those times that we no longer take His presence for granted, but His actual presence comes alive in our spirit and we begin to understand that together we can do anything . . . “in Jesus’ name.”

When we finally grasp the fact that within those few words, "In Jesus' name", is the power to move mountains, to heal the sick, cast out demons, open the eyes of the blind, unstop deaf ears, and raise the dead, we will then step into the realm of "these signs shall follow them that believe" (Mark 16:17-18).  The world is crying out, desperate to see the supernatural Jesus manifested in His followers with signs and wonders following (Romans 8:19).  When this happens people will flock to Him!

(EDITOR’S NOTE:  If you would like to have Ken Simmons speak to your church or organization you can contact him at kensimmons777@aol.com – You can also read many of his articles on his website at www.kensimmonsministries.com -- Feel free to share any of Ken's articles with your friends.)