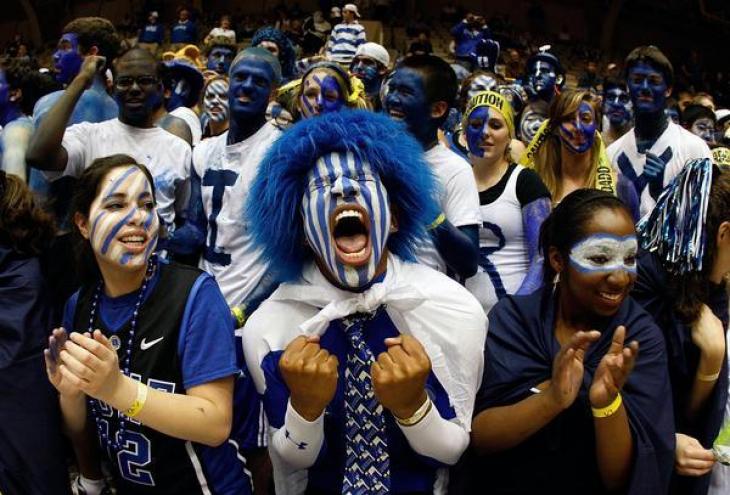 Who are the REAL FANATICS? . . . by Ken Simmons

Most people today think nothing of fans (same word origins as "fanatic") jumping up and down and shouting at a football game, or going to a rock concert and raising their hands and working themselves into a frenzy over rock musicians, but if they see Christians raising their hands and praising Jesus . . . they’re called fanatics! That’s right, let’s not get too excited about this Jesus business -- after all, He's just the Savior of the World! It's all a matter of perspective. Let’s see if we can discover who the real fanatics are.

Some years back I had a vision in which I saw multitudes, millions, of people heading for a cliff. As I looked closer I saw that all the people were blind and completely oblivious to the fact that they were headed for a horrible death. And yet they came. They came by the tens of thousands and they continued to plunge to their deaths over the cliff. And in the dream I saw a few men and women who were, against all odds, standing at the edge of those cliffs shouting and waving their hands, trying to warn the people that if they didn’t stop and turn around they’d fall to their death. A few heeded their warnings but most did not.

Even an atheist would try to warn them, wouldn’t you?

That vision was immediately followed by another in which I was driving down a dark and winding road during a terrible storm, in the midst of a forest, and just as I rounded a bend I immediately came upon a bridge that had been washed out and I barely missed a headlong plunge into a raging river hundreds of feet below. In the dream I turned my car around and headed back up the road, and I parked my car as best I could to block the road. Next I set off flares up ahead because I knew that if the oncoming traffic was not warned they would certainly plunge to a horrible death.

I’m sure that even an atheist would put out flares and try to block the road for them, wouldn’t you?

The vision continued. Next I was in a laboratory and somehow I had been given the formula that would cure every form of cancer, a formula that would eliminate one of the most damnable diseases mankind has ever faced. I actually had the cure—a formula, if you will—and it was all neatly inside a folder marked “Top Secret – Eyes Only” written on the cover. I put the folder under my arm and headed out the door. As I left the laboratory I was suddenly surrounded by people, people everywhere, who had cancer and would die without the cure—the cure that I was holding, marked “Top Secret.”

Even an atheist would share that cure with them, wouldn’t you?

What man or woman, even an atheist, would not try to warn the multitudes before they plunged off a cliff to their deaths? Who’s the fanatic?

What man or woman, even an atheist, would not attempt to block the road and warn the oncoming traffic that the bridge was out and that to continue would mean certain death?

What man or woman, even an atheist, would not share the cure for one of the greatest plagues of mankind?

Is it fanatical to tell a lonely, frightened, and dying world that the Son of the Living God “became flesh and lived among us,” (see John 1:14) to take our punishment on Himself for our sins? He took the unimaginable pain of crucifixion, the shame being hanged naked and nailed to a cross, and for that brief moment He suffered the separation from His fellowship with the Father, and it was then and there that He became sin itself so that we could escape our deserved death sentence. When He took our sins upon Himself was when a righteous Father God could not look upon Jesus, who was carrying the sins of the world upon Himself, and when He cried out, "My God, My God, why have you forsaken Me?" fulfilling the prophecies found in the *Book of Psalms 22:1 - 18.

Yeah, don’t get too excited about Jesus, the Christ, the Savior, because you don’t want anyone to think you’re a fanatic. He was the greatest hero the world has ever known, because He volunteered for the crucifixion when He traveled to Jerusalem, knowing He would be hanged on a tree – Who’s a fanatic? Who, indeed, is the fanatic? Aw, don’t get me started!

This writer has known so many who were considered the derelicts of society. They were drug dealers, addicts, gang bangers and prostitutes, but when they surrendered to Jesus they went from “death to life” – from "darkness into the light" -- and they were thrilled and excited about it. Often they were seen raising their hands and praising God with tears streaming down their faces. They had an undeniable and unquenchable zeal for their faith in Jesus. God says that He’d rather you be "hot or cold, but because you are lukewarm I will vomit you out of My mouth" (see Revelation 3:16). What is your “Faith Temperature”?

Fall off a cliff and you’ll die, but if you’ve been born again you’ll live forever anyway. Drive off a cliff into a raging river below and you’ll die, but you’ll never experience The Second Death, which is in a place where there is "weeping and wailing and gnashing of teeth" -- and it is forever. Cancer has the potential to kill you, but it will never send you to hell if you have been born again.

*(NOTE: In the Book of Psalms, 22:1 - 18, King David describes in excruciating detail the crucifixion of Jesus Christ (see v. 16). "They pierced my hands and feet," and v. 18 "They divide My garments among them, and for My clothing they cast lots." Wow, nearly 1,000 years before it happened and hundreds of years before crucifixion was even invented!!) Share this with your Jewish friends. It amazes them every time.

(Some of these were examples taken from Ken's true life story "The Prodigal Diaries," available on Amazon, Barnes & Noble, Walmart, iTunes, and Kobo.  You can read more of his articles on his website www.kensimmonsministries.com)

(PUBLICIST'S NOTE: If you would like to have Ken Simmons speak to your church or organization you can contact him at kensimmons777@gmail.com)